“Come on girls, show us what you’ve got!! Don’t let her get past you, Anna! Jump higher, Erin, HIGHER!!” Gasping and dripping sweat, we race madly around the netball court, desperate to show what we can do. We run, we throw, we shoot, we defend; we work our guts out. It’s a redundant investment of energy as we’re all assured a spot on a team, but we’re eager to do our very best.

It’s 1988 and the selection for the Saint Augustine’s netball teams is taking place. Seven players make a team so with eighteen girls we’ve got two teams – allowing for a couple of spares. The four notorious netball mums are here … along with their cut-throat competitive streak.  They form the selection committee and screech at us from the sidelines.

We finish displaying our netball prowess and inelegantly slurp on sliced orange quarters, the juices dribbling down our gawky eleven-year-old faces. We wait for the verdict; which team will we be in?

The selection committee whispers together, occasionally nodding and jotting on a notepad.  After fifteen minutes the “Queen Mum” gathers us in the centre of the court.

The popular, the pretty, the prize-winning and the perfect are all present. And all four daughters of the mothers on the selection committee are in this team.  I look over at Claudine who smiles knowingly at me. There’s supposed to be an even distribution of skills on the two teams, but it’s glaringly obvious that one team has been composed of winners and the other of losers. This is the Alpha team.

The “other” team.  The Scraps. The unsporty, the uncoordinated, the uncool and the unattractive ….

Both teams are allocated a coach. Sheree’s mother (slim, pretty Tracey) will coach Team 1. Overweight, frumpy Sharon will coach Team 2 …. from her wheelchair.  Belinda smirks at me.

The twenty-week netball season commences.  We play our first game. And win. Only we don’t just win, we slaughter Dawes Road Primary 42-3. We play our next game.  Haslem Street Primary.  And win.  36-3. We play the “Alpha” Saint Aug’s team.  And win.  We play Tongala, Merrigum and Girgarre.  And win.  Within six games we are undefeated and the team to beat. 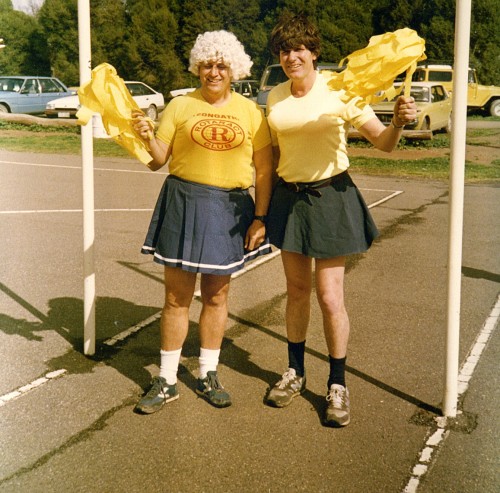 The combination of our team is inexplicably magical. The odd-ball bunch of misfits fits.  Kelly, as Goal Attack, rarely misses a goal.  Me, as Goal Defence, rarely lets one through.  Sprightly Kate, Inece and Tina flit about the court like nimble pixies, getting the ball to where it needs to be and preventing it being where it shouldn’t.

For nineteen weeks we train every Tuesday and play every Saturday at the local outdoor netball courts.  We win every game.  Then comes the big day; the Grand Final.

One-by-one we arrive, greeted by Sharon.  Her two slobbering rottweilers are dressed in yellow t-shirts – our mascots.  We’re relaxed, not an ounce of tension among us. We’ll win, we know.  But we aren’t arrogant.  We’ll have fun. We’ll laugh.  The games never really matter to us – we just enjoy ourselves.  We’re a mixture of adolescents and pre-adolescents, but while we play netball we’re all joyful, uncomplicated children.

We hear a crowd roar with laughter from a distant court near the car-park.  There are sixteen courts with a game taking place on every one …. so literally hundreds of people look over at the commotion.  I see the cause of the ruckus and with horror immediately look at Kate.  Jesus Christ –our fathers have come dressed as cheerleaders!  Complete with skirts, wigs, balloon-boobs and pom-poms!  Kate and I are both mortified … but even we have to admit it’s funny.  And we’re all caught up in the alchemy that has taken place this season.  The losers are the winners.

And the Grand Final?  We won that too.

It was tremendous that our success defied expectations, but I always felt sorry for the other team.  They were, almost without exception, an equally nice group of girls and it must have been difficult for them to have experienced the horrible feeling that accompanies the failure to meet expectations.  Individually, most of them went on to be exceptional netball players during their teenage years.   I guess it’s just another example of how the performance of a team isn’t always about having the most skilled or talented people, but about how they function together.

Since writing this, I’ve been contacted by a few people from school (including some of those who played netball with me – both in this team and others). One sent me some photos so I’ve decided to add them! 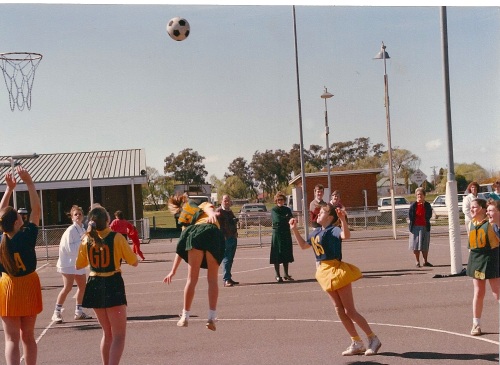 The game in action! 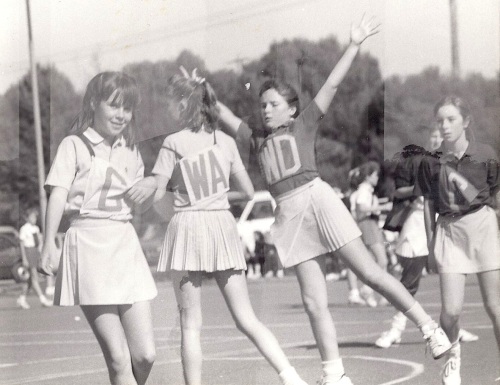 13 responses to “The underdogs”