“Hello Simone!!!  Oh so good to hear your voice!  I’m sorry I’ve never been at home to take any of your calls.  I was in Kyabram for a funeral, and then I was in Brisbane for a netball tournament; the kids I’m coaching are undefeated.  Undefeated, Simone!  It’s marvelous!  And then I had to head to Eumundi Market on the weekend to set up Heidi’s stall because she’s sprained her ankle.  I’ll tell you what – I’m looking forward to getting old so I can slow down”! 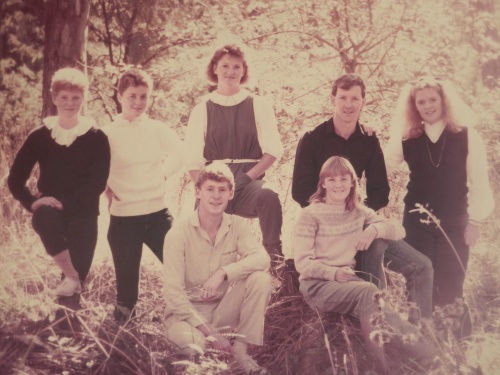 Jillian’s 75 and this is my first phone conversation with her in 27 years.  From babyhood to starting school, my mother dropped me at Jillian’s house each morning.  There I would spend each day until my father finished work.  At 4:30pm he would turn up to take me home, balancing me on the handlebars of his bike; me without a child-seat and neither of us wearing helmets (the wonderful seventies).  As I grew up I would still go to Jillian’s when I was sick.

Jillian has seven children (five girls and two boys), all older than me, who she raised on her own.  My days with her were idyllically peaceful; we went to Mass every day (yes, every day), and then I’d play on my own each afternoon, helping with chores as much as children can.  The tranquility came to an abrupt halt when school finished and her children came home.

I was an extremely shy and reserved child so at 4pm each day (which by my clock was just after Kimba the White Lion finished) I was bewildered as the house transformed into carnival of noise and activity.  It was like being pulled onto stage at a Cirque du Soleil performance and I was stunned by the show.

Erina, loud and boisterous, would pick me up and spin me around until I felt dizzy.  Madeline would stand in front of me and dance (probably unsuccessfully trying to get me to join in), and Justin would play his guitar, serenading me with “Wild Thing”.  Balls were thrown, bikes were ridden, and music blared (to this day the song “Let’s hear it for the boy” reminds me of Erina; she played it non- stop when it was first released). 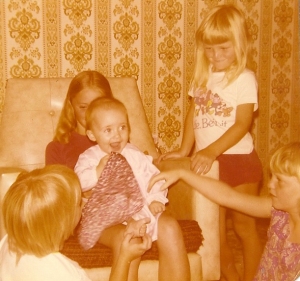 Me (the baby) being held by Madeline, Heidi standing, Erina holding her hand out to me & the back of Justin’s head. It’s 1977.

Jillian now lives in the State of Queensland, far north from me, and I’m going to catch up with her next week.  Her children all live in the same city with her and I remember them fondly.

Jillian:  Right, so when are you thinking of visiting?

Me (slightly bowled over by Jillian’s energetic address and feeling that same bewildered sensation I had as a child):  I was thinking I fly out on Thursday and depart on Sunday?

Jillian:  But Simone, by the time you arrive on Thursday and then depart on Sunday, you’ll only be here for two full days and there’s no way that’s long enough.  Everyone wants to see you.  You’ll have to arrive sooner.

I hang up, smiling at my unquestioned change of flight times; disobeying Jillian simply isn’t in my programming, even after decades. 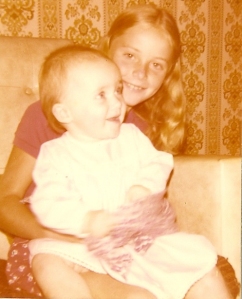 So I head to Queensland, not Shy Little Simone, but Grown-up Simone.  My emotions are a mixture of nerves and excitement, but more than anything I’m eager to see her again.  And I hope she makes me some of her jelly slice – man I love her jelly slice (I make it myself about once a month).

I’ve since been north and had a wonderful visit.  The connection with Jillian is still present and I was able to catch up with Jacqui, Justin, Maddie and Heidi.

After 27 years my relationship with Jillian has grown into a friendship between two adults, but I was reminded of our initial guardian-to-child link in an incident which delighted me.  As I descended the stairs approaching the living room I called out loudly to her.  She replied, “Now Simone, you’ve forgotten that I don’t have conversations from room-to-room.  If you want me to respond you’ll have to speak to me in the same room”.  I apologised and smiled to myself.  Being told off by Jillian was a heartwarming pleasure; I’m still her Simone and she’ll always be my Jillian.