My niece, Emily, in her bunny mask

I lean forward and blow out the candles on my cake to cheers from my family.

My sister smiles at me with a mischievous twinkle in her eye and says to her three young daughters “Okay girls, let’s clap out Auntie Simone’s age.  It’s a lot of claps … are you ready?”

I give Penny a look of sarcastic but good-natured thanks as her girls nod enthusiastically.  We clap and count.

Emily in her Easter mask

Hmm, was that really necessary?

It’s Easter Saturday and we’re gathered round the table on the back verandah to celebrate my recent birthday, and my current visit.  Mum was up early to prepare the salads and meats for the BBQ, while her husband David cleared the spiders and cobwebs from the outdoor setting.

Birthdays have always been closely linked to Easter for our tribe.  If it’s not near mine at the end of March, then it’s near my sister’s in early April.  Birthday cakes, the Easter bunny, and early Autumn BBQs all interplay.

After the cutting of the cake, my nieces leave the table to play in the backyard.  The men assume their positions overseeing the grilling meat, and the women set the table and bring out the salads and drinks.

I squat down to pull out a bottle of wine from the fridge and spot something that brings a glint to my eye: a chocolate bunny soldier.  I love these bunnies.  Love them.  The great tragedy is that they’re only released over Easter and having lived in London for fourteen years, I’ve missed them for over a decade.  God, I so hope that bunny’s a surprise for me tomorrow …

When I return to the BBQ area, my seven-year-old niece is wearing a mask that she made at school.  I laugh at her, and she’s pleased.  She doesn’t know that my merriment is partly at her, and partly at the memory of the masks Penny and I used to wear at Easter (or any event for that matter … costumes seemed to be donned for the smallest of reasons in my household).

It makes me happy that the celebratory traditions are continuing through the generations and that I’m here to witness them; including the irreverent quips! 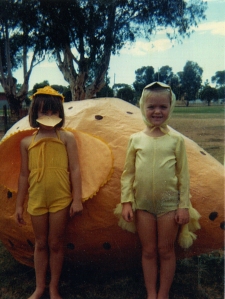 The bunny was for me.  Mum presented it with a word of warning “Penny will make a bit of a scene about this as I’ve told her I’m not getting her bunny soldiers anymore and she’s miffed.  But for god’s sake, she’s a forty-year-old mother with three children.  Plus she’s still got the ones I gave her from the last three years in her pantry.  I know you’ll enjoy yours and not hold on to it”. (That would be part of the reason I’m not seven-stone ….).

Sure enough, as soon as my sister arrived she theatrically announced “Enjoy your bunny soldier because apparently you don’t get them after you turn forty (at this point, she looked directly at our mother).  Savour it because you‘ve only got another four coming your way”.  Mum just smiled in resigned exasperation.  I smiled knowing that Mum will continue to bestow me with a bunny soldier for as long as I continue to clap with the genuine delight of a three-year-old each time I’m given one (which I’ll then consume within 48 hours …).

Since posting this I’ve been informed that I’m not a chicken in the first photograph (in the black top), but am, in fact, a daisy flower.  Allegedly the green tights should have made that obvious.  “What’s wrong with you?  You’re a daisy, not a bloody chicken!  Why do you think you’re wearing green tights?  A chicken doesn’t have green legs.  Simpleton!”