A motel room in Bendigo, Tuesday morning.  It’s a cold day and I put my on coat in readiness to check-out.  It’s time to get to my meeting.  I see a note wedged under my door.  It must have been placed there last night or before my alarm went off this morning.  I pull it out and unfold it, presumably it’s from the staff advising me of checkout times or passing on a phone call. 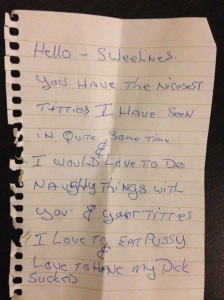 Unless I misread the chemistry when I checked in, that’s not from the staff.

I turn the page …

And they say romance is dead.

Sadly I’ll not meet the Shakespearean lyricist whose sweet words have melted my heart.  I’m leaving.  What could have been on Tuesday night will never be.  Sigh.  Yet again I’ve missed out on a man who is clearly The One.

At reception I hand in my room key and inform the woman of the note.  She’s shocked, “And he’s used that horrible notepad, he didn’t even write it on nice paper”!  I’m not sure that would have made the difference.  But I’m not fully up to speed with Australian courtship and standards here may be lower.

As I drive to work, I’m bemused at the thinking of the man who wrote the message. It’s not a short note.  It’s not a single sentence, or a few words.  When Mr Motel decided to contact me this is the approach he took.  At no point while writing did it cross his mind “Maybe this isn’t a good idea …”.  No.  He pulled out a pen and paper, he wrote the first page … then he turned it and KEPT WRITING.  Then he ripped the page out, folded it, and slipped it under the door.  Through all that, he didn’t think “This is utterly ludicrous. What am I doing?!” He had focus and ploughed on … logic and rationale firmly discarded.

My main response to this incident?  Aside from laughter, it made me a little homesick for London.  The city where being sexually accosted is a weekly, if not daily, event for young women.  Black British men in particular are very open in approaching ladies who take their fancy.  Muslim men are equally brazen, though tend to use a different style.  White British men need a pint or 10 before their cheeky chappy (no euphemism) inevitably emerges.  Australians are a little shyer, a little less confident, and a lot more prudish.  It’s been a while since I encountered men letting their weird sexual thoughts blurt out, uncensored, and the amusement that can provide.

I doubt Mr Motel was aiming for bemusement and nostalgia, but I don’t really know if even Mr Motel knew what he was hoping to achieve.  Certainly the absence of his name or phone number indicates that he was hoping for anonymity … and his wife not finding out.

Yesterday I voted in the Australian election (less exciting or important as the big vote of the last 10 days – Brexit). As I walked into the polling booth a man rushed up next to me “I imagine you’ll be voting for the Australian Sex Party”! 1) Ugh. 2) Yes, there is such a party.